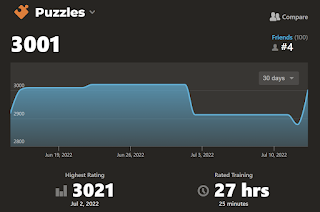 A friend pointed out that people don't know that it takes 10,000 hours to become a chess master.  This is according to the rule that it takes 10,000 hours to master anything.  I suspect that for some people that it would take more than 10,000 hours and for other people less.  The younger people start, the easier it is to improve.  By my age, most people have given up trying to get better at chess, at least by any significant amount.  However, it is not in my nature to give up.  I still would like to be a chess master.
I feel that there is some benefit to the chess.com puzzles.  It is said that to improve that you need to get out of your comfort zone, and these problems definitely take me out of my comfort zone.  I am at least as likely to fail to find the solutions as I am to succeed, even after some serious calculation on my part.  Unlike the simple chess puzzles on my website, which are designed to build pattern recognition, the vast majority of these problems require at least a minute of calculation, if not more.  The longest I took on a single one was about seven minutes and I got it wrong.
These puzzles might be good training for tournament chess.  After I did a large number of them, I felt that my deep calculation skill had improved a little.  This is different from speed chess or simple problems where people usually go with their first impression.  My first impression frequently fails because most of these puzzles are way trickier than they first appear.
Four weeks ago today I was bragging that I got my chess.com puzzle rating up to 3003.  It was a significant milestone. These ratings don't match standard USCF ratings, because it is possible to get up to a rating of 65,540 which appears to be the maximum, and a handful of people have actually obtained this rating.  After reaching 3003, I tried to go higher and got to 3021, but then I went all the way down to 2878.  Today I spent three hours doing the puzzles, and after much difficulty, I got up to 3001.
I'm quitting for now while I am ahead.  I keep a link to every problem that I have done, and the site allows you to go back and review them.  I have a total of 975 puzzles saved, of which 875 I have not yet reviewed.  My plan is to review all of them multiple times, and that will take many months.  Then I will see if I can raise my rating higher.
Always my goal is to take difficult tasks and make them easy or easier with practice.
--
Best wishes,