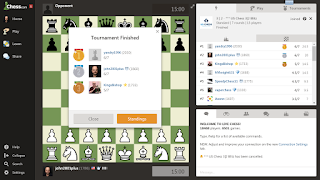 I tied for 1st, but got second on tie breaks.   I don't think that I have ever tied for first before in this blitz tournament.  I lost to yandry1996, although I did my best to beat him. There were a couple of masters in the tournament who lost early and dropped out.  The tournament started with 27 players, but usually half the people drop out before it is finished.
I had a great deal of trouble with the blitz tournaments at first, but my online blitz rating has made a pretty good progression over the last year. 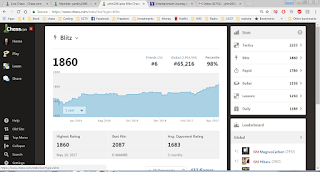 I think that the ratings are low compared to standard USCF ratings, but maybe not as much when you get up to the master level.
--
Best wishes,

http://www.entertainmentjourney.com
Posted by John Coffey at 9:40 PM No comments: