In Defense of Speed Chess

There might be some debate, and even question in my mind, as to what constitutes “chess skill.”  The two areas of the game that I have studied the most are tactics and endgames, especially king and pawn endings, and consequently I can pick up on ideas in these areas very quickly.   These two areas are “intuitive” for me in the sense that they are more automatic.  Someone who spends a couple minutes thinking about their move might make the same move that I would, but for some of these positions I would only need a few seconds.

From my perspective, a speed game is more of a measure of a person’s chess skill because it shows what they know intuitively.   From my perspective, someone who is good at analyzing can compensate for less intuition in a longer game.   I see the flip side argument to this, where you could say that in a longer game, chess skill consists of a person’s intuition and knowledge combined with an ability to analyze the game well.

Maybe I take this position because I get my best results at faster time controls.

I think that about 4 weeks ago I was playing my best chess that I ever played.  Then I got sick, so now I feel that my chess skill is a little off.


Sent from my iPhone
Posted by John Coffey at 5:32 PM No comments:

I find these studies to be an intellectual curiosity

I think that I found a winning move here ... 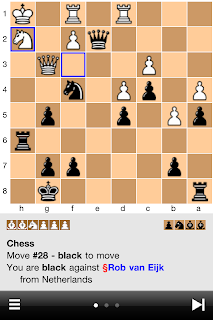