The chess games played in the series to the extent that they can be followed have been analyzed on YouTube. Most of them are based on real games played by Grandmasters. I recognized the final position from a famous Paul Morphy game from around 1859. One difference is that Paul Morphy played the brilliant game while blindfolded.

At one point in the show someone presents Beth Harmon with a 3 move chess problem. This problem appeared online somewhere. This particular problem should have been at least somewhat difficult, but I just happened to pick up on the answer within a few seconds.

Composed chess problems have a rule where the first move can't be a capture or a check. This sometimes means that the losing side is placed in zugzwang, which means that it is unfavorable for him to have to make a move. These problems are much more subtle than positions from real games.

Because these problems are often very difficult, I have a technique where I imagine a couple of moves for the losing side and then given those moves I look for a way to win. If I can't solve it then I know that the solution involves preventing those moves from happening.

I have some thoughts on what the possible symbolism of the ending of the show might mean. I would like to discuss it with somebody who has seen it.

John Coffey
Posted by John Coffey at 10:04 PM No comments: 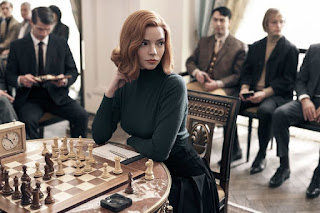 Hollywood tends to make fictional movies about people who are so talented that they quickly rise to the top of some competitive sport without really having to earn it. In reality, a game like chess is immensely difficult to master, and the top-level players spend decades of full-time effort to get to that level. You almost have to be a little bit crazy to be a top tier chess player.
So I resisted at first watching Queen's Gambit, but as a drama about chess, it is good. There is also a major theme about substance abuse. These together make a pretty good story.

Obviously, there is also a theme of female empowerment. This is interesting because during the 1950s and 1960s in which this story takes place, there weren't that many women chess players and none at the higher levels. Things have improved quite a bit since then, first with the Polgar sisters becoming top tier players, and more recently with Chinese star Hou Yifan. Yet, chess is still a game dominated by men, maybe because women find it less interesting. Men more than women prefer competitive sports, especially one as egotistical as chess.

http://www.entertainmentjourney.com
Posted by John Coffey at 11:50 PM No comments:

I think that this is a very interesting game worth studying.
https://www.youtube.com/watch?v=Hfgfkjj0ZpA
The ending is a draw as stated, but I think that if the pawns are on f4 and f5 instead of g4 and g5, then it is a win for White.  (After putting the pawn on a7 and the rook on a8 then the Black King can't go to f7 because Rh8! wins for White, because after Rxa7 White has Rh7+.)  So White eventually wins the f5 pawn with his King, and then White marches the f pawn up to f6 throwing the Black King off his g7 and h7 defensive squares.  I just confirmed this with endgame tablebases.
What I have a hard time wrapping my head around, is why doesn't this same strategy work with a G pawn?  The answer is that Black can set his king on g7 and give checks with the rook. With an F pawn then the Black King either ends up on f7 which loses to Rh8, or it ends up h7 allowing White to play f7 threatening to queen.
However, I am just assuming that the Black King just goes between g7 and h7.  There are other possibilities, but these are winning for White as well.  https://syzygy-tables.info/?fen=8/6k1/R7/P4p2/5P2/r7/6K1/8_w_-_-_0_1
Posted by John Coffey at 12:36 PM No comments:

How I Surprised A Grandmaster On The 2nd Move... - YouTube

This game is interesting, along with the nervous emotion of the presenter.
https://www.youtube.com/watch?v=yHzgjobAoaE
Posted by John Coffey at 1:07 AM No comments: