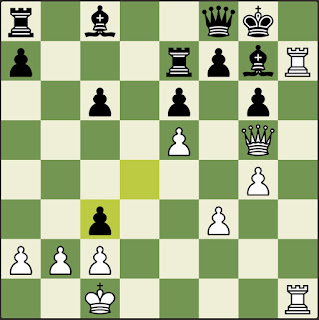 This is an interesting chess game
https://www.youtube.com/watch?v=JwDSOei_jIg
Posted by John Coffey at 10:51 PM No comments:

Carlsen's secrets: How does he do it?

"There is an equal position on the board, and the opponent thinks: this is dead drawn. I can play almost anything and there is nothing he can do. But Magnus plays on, seeking complications, setting up threats. He is narrowing the margin required to hold the draw. Soon his opponent is thinking: why is he still playing – I can hold a draw with any of these three moves. Then: I can hold with this move and with this move. And then: I still have one clear way to hold a draw. And under the strain of constantly having to solve deep and complex problems, more often than not the opponent will crack. Magnus wins not because it was in the position, he wins because he is Magnus."
https://en.chessbase.com/post/carlsen-s-secrets-how-does-he-do-it-1
Posted by John Coffey at 12:10 AM No comments:

I have been playing chess seriously for 42 years, so in the 2016 Open Chess Championship when I play an 8 year old who plays almost as well as me, I get nervous. I am also amazed. I was playing 8 year old Luke Ye from Missouri.

There are some gaps in my chess opening knowledge, because chess is nearly infinite, and you can't know everything. Earlier in the week I tried to fix one of my gaps in my knowledge by studying a game played by world champion Magnus Carlsen in the French Defense. When I played the kid, he followed the world champion game closely, which by itself made me nervous, but he also started an attack against my kingside sooner than I expected. I was not quite prepared for this. Before the game I had asked Luke's dad if the kid had coaching, which he had, which means that some master or Grandmaster had taught him to play a certain way against the French Defense. I had the sense that the kid was following some sort of script by wrote, where he had been coached that if you put your pieces on specific squares then you can checkmate your opponent. Around move 15 he started an attack against my kingside and I spent over 20 moves defending. The kid was relentless. He just kept pursuing the idea of checkmating me on the kingside, somewhat to his detriment because it allowed me to be stronger on the queenside. I had my own plan, which took a long time to implement, but my plan was to weaken his pawn structure and trade the pieces down to an even king and rook endgame that was technically winning for me, which is what happened. I had figured that no matter how strong this prodigy might be, he wasn't going to be as strong as me in the endgame.

The two of us had spent spent about 75 minutes each on the first 25 moves. This is about the point that I felt that the game was turning in my favor, so I was able to move more quickly after that.

My opponent's 37nth move was a disaster. When I saw him reach for the pawn I thought "Don't do it!". He played such a good game up to that point, I didn't want to see him throw it all away on one bad move. I was winning anyway, but there was still a little bit of fight left in the game that would have been fun to play out. Instead he made a mistake and the game ended very quickly after that.

It is nice to win a game after a couple of tough losses. I now have 4.5 out of 8. At the very least I will finish the tournament with 4.5 out of 9. I don't think that the last round pairings will be kind to me; I will most likely play someone stronger than me, but I will give it my best effort. It would be very nice to get a draw or a win which would put me over 50%.

This is subtle, but I like subtlety.  It is not a very hard position, but initially I had a hard time wrapping my head around why one move is better than the other.   However, it is all about tempos and weak pawns.
http://chesslevel5.blogspot.com/2018/08/what-is-best-move-for-black.html