My previous email might be wrong.
---------- Forwarded message ---------
From: Bill
The comments say, "Today is Dia de los Santos inocentes in Spain. The Spanish equivalent of April fools day. Whole thing is satire."
----- Forwarded Message -----
From: John Coffey <john2001plus@gmail.com>
Sent: Wednesday, December 28, 2022 at 03:39:28 PM EST
Subject: HUGE CARLSEN NEWS!
Apparently, Magnus Carlsen is taking a year-long break from playing in Over The Board tournaments.
He mentions hating having to travel so much.
https://www.youtube.com/watch?v=NKHKnUVlp2o
--
Best wishes,

http://www.entertainmentjourney.com
Posted by John Coffey at 11:32 AM No comments:

Apparently, Magnus Carlsen is taking a year-long break from playing in Over The Board tournaments.
He mentions hating having to travel so much.
https://www.youtube.com/watch?v=NKHKnUVlp2o
Posted by John Coffey at 3:38 PM No comments:

I shouldn't talk since I am an Expert, but this is the kind of combo that takes me a couple of seconds to see.

A couple of weeks ago I was proud of myself for seeing a six-move combo in a speed game, but I made the same mistake that many players make where I didn't calculate the next move. After winning my opponent's rook I realized that he could trap my queen. My lower-rated opponent didn't see it, but he could have been winning.
Posted by John Coffey at 2:54 PM No comments:

The Stockfish chess engine has switched to a new evaluation method similar to what Alpha Zero or Lela Chess uses.  It is no longer about material but winning chances, which is dependent upon an AI that can train itself.  This method allowed the program Alpha Go to beat the best Go players, which was previously thought to be impossible.
"New evaluation

https://www.youtube.com/watch?v=CNCA4dx3pII
Posted by John Coffey at 8:00 PM No comments: 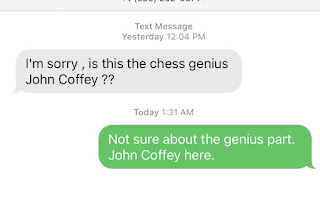 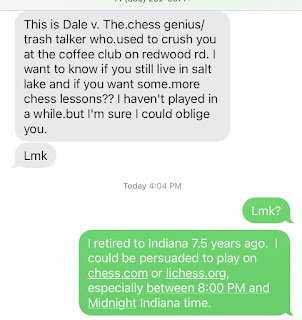 Dale is a Utah chess player I haven't seen in 10 to 12 years who out of the blue sends me a text saying he wants to play me again and claims (presumably jokingly) that he used to crush me on the chess board.
Posted by John Coffey at 5:49 PM No comments:

Introduction to the Catalan

Presented for your consideration.
The Catalan is a popular opening at the Grandmaster level.  Magnus Carlsen scores very well with it.  The problem for amateurs is that it involves a great deal of theory.  The following playlist has 12 videos that go into the Catalan in great detail.  This is at least at the Master level, but if a person wants to become a chess master, like me, this might be worth studying.
I have already expended a great deal of effort trying to learn the opening from these videos.  My plan is to learn everything, but this might take months to fully accomplish.  I also think that it will take a great deal of practice, preferably at the club level, to understand the ideas behind this opening.
https://www.youtube.com/watch?v=s0mAzxJRHpk&list=PLssNbVBYrGcBwWsSqwig0dAymsPQd0dzy&index=1
Posted by John Coffey at 1:57 PM No comments:

It seems to me that the rules can vary from place to place.  For example, it was common to now allow a dropped piece to deliver checkmate.
"Pieces in reserve may be dropped on any vacant square, including squares where the piece delivers check or checkmate; however, pawns may not be dropped on the first or last rank. (A variant does not allow dropped pieces to deliver check.) Dropped pawns may promote, but all promoted pawns convert back to pawns when captured. In play over the board, a promoted pawn can be put on its side to indicate promotion.[5] A pawn placed on the second rank may move two squares on its first move. A rook placed on the rook's typical starting square (a1, h1, a8, h8) may take part in castling. Each player must keep the reserve or stock pieces on the table in front of the board, always visible to all players of the game."
I don't like Bughouse much, but it can be a fun diversion...

Bughouse chess is controversial among chess teachers. While some instructors find beneficial learning outcomes for bughouse, most do not consider it to have a positive effect, especially for novice chess players.[54] According to Susan Polgar, "If your children want to play bughouse for fun, it is OK. But just remember that it is not chess and it has no positive value for chess. In fact, I absolutely recommend no bughouse during a tournament."[55] Arguments supporting a negative view of bughouse include that it distorts typical chess pattern recognition[56] and that it too heavily emphasizes tactical play at the expense of positional strategy.[57] For example, in bughouse, one can just drop a pawn to compensate for a weakness created by moving one, unlike normal chess. It also lacks endgame play due to pieces being recycled, thereby reducing the need for precise moves. In addition, the lack of control over teammates' boards introduces randomness that is not encountered in normal chess. Further, many claim that since there is no set order of moves between the two boards, normal calculation ability is diminished. It also shares criticisms with speed chess in general, potentially encouraging a habit of moving too fast or playing unsoundly with the expectation that one's opponent will be moving quickly.[36]
https://en.wikipedia.org/wiki/Bughouse_chess
Posted by John Coffey at 2:00 PM No comments: