Third Place in the USCF Online rated speed tournament was a surprise.

There were some higher rated players who dropped out before the final round, probably because they lost to the top player with the monster rating.   It says "17 players", but that doesn't include the 18 who dropped out before the final round.
I had a couple of games that I really should have lost, but won anyway.  I made many errors, but so did my opponents.  This happens sometimes in speed chess.  My last round opponent literally had me in a mating net and threw it away. 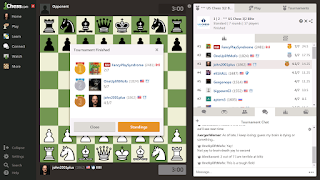