Happy with my accuracy on chess.com in ten minute games

Overall I am pleased with my accuracy on 5+5 (or G/10) games.  I played 17 games tonight.  I lost two.  According to the chess.com analysis feature,
I had 9 games with over 90% accuracy, with my best two games scoring 99%.  I have five games in the '80s.  Two games in the '70s and my worst game was 61.%
I feel like I am playing more accurately than I have in the past.  I'm obviously not perfect, and I do have some bad games.  However, the games are almost speed chess.   I would be happy to get these percentages in longer games.
I think that the chess.com accuracy numbers might be arbitrary.  I also think that if I played tougher competition that I would be more likely to make mistakes because really strong players have ways of pressuring their opponents into making errors.  (Imagine playing a pro football team.  No matter how good you are, they are going to make you look bad.)
My rating on chess.com has been hovering in the 1900's when it was previously in the mid to high 1800's.  Compared to US Chess Federation ratings, I think that this would be equal to somewhere between 2000 and 2150 (Expert) because I have always thought that chess.com ratings were low.  I can't be sure though. 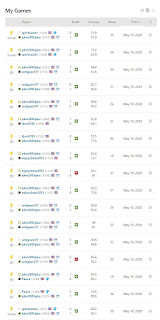